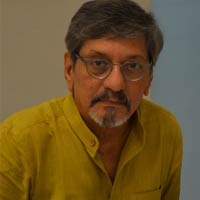 Amol Paleker is a postgraduate in fine arts from the Sir J J School of Arts, Mumbai. For several years now, he has been a leading persona of avant garde theatre in India. Palekar has been active in Marathi and Hindi theatre as an actor, director and producer since 1967. As an actor, he lit up the silver screen with his natural and effortless acting for over a decade from 1970. His charming image as the “boy next door” carved an unparallel niche in contrast to the larger-than-life heroes prevalent at that time in Indian cinema. Palekar is the recipient of three Filmfare and six state awards as best actor. As a director, he is especially known for the sensitive portrayal of women, selection of classic stories from Indian literature, and perceptive handling of progressive issues, which can be seen in movies such as “Ankahee”, “Aakriet” and “Thoda Sa Rumani Ho Jayein”. His direction of television serials on the national network such as “Kachchi Dhoop”, “Mrignayani”, etc. were exceptionally admired throughout the country.