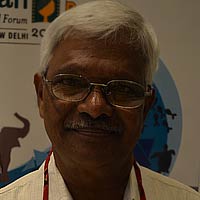 Georgekutty A L is the founder editor of Deep Focus Cinema, a scholarly film journal on Indian cinema and Secretary of Bangalore Film Society which organizes interactive film screenings and discussions. He is also the founder director of Voices from the Waters International Traveling Film Festival which focuses on Water.