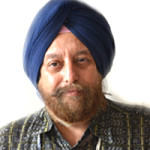 Prabhjot Sodhi served as Country Program Manager, Global Environment Facility- Small Grant Programme-UNDP, CEE for 14 years. He was awarded the `Most Excellent Order of the Member of British Empire’ in 1998 by the Government of United Kingdom for promoting sustainable development practices among tribals in India. In September 2012, The George Washington University, Washington DC, USA honored him with the Talented Conservator Award in recognition of his contributions in the field of biodiversity conservation and livelihoods. Several of his works have been published in international and national journals.