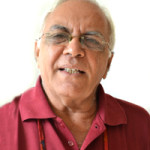 Vinod Ganatra, the only Indian recipient of THE LIV ULLMANN PEACE PRIZE, CHICAGO for his film HARUN-ARUN has been active in the Film & Television Production from 1982. He has edited and directed about 400 Documentaries & News Reels. He is a recipient of DADA SAHEB PHALKE – LIFETIME ACHIEVEMENT AWARD conferred by ‘THE ASSOCIATION OF FILM & VIDEO EDITORS’. He has several National & International Awards to his credit. He has also served as Jury at 63 National & International Film Festivals world over for last two decades.