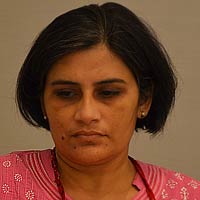 Namrata Joshi is Senior Associate Editor and film critic with Outlook newsmagazine. Winner of India’s National Award for Best Film Critic for 2004, she has been a member of the Fipresci critics’ juries at the Toronto, Transilvania, Cairo, Moscow and Trivandrum international film festivals. She has been to University of Westminster and Cardiff University on Chevening and Charles Wallace trust fellowships respectively. She has written monographs on actresses Nutan and Mumtaz for a series Women In Indian Film and an essay on Indian superstar Shah Rukh Khan for Bollywood Top 20: Superstars of Indian Cinema, an anthology brought out by Penguin.